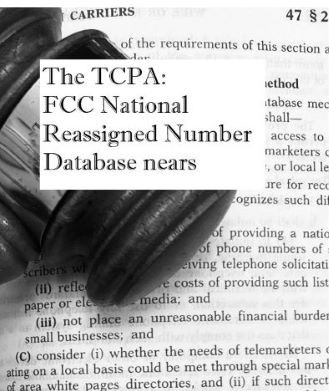 In the world of Telemarketing and mobile marketing, the scenario was a classic TCPA catch-22.  The Marketer had obtained the expressed written TCPA consent of telephone user to receive calls (or automated SMS messages) about promotions and marketing, but then, the user changes their carrier and number without informing the marketer.  It was a rock and a hard place dilemma.  Local Number Portability verification databases were unavailable to them to cross-check the telephone number on file with the current subscriber of that number. Only carriers could access that information. This scenario was particularly sticky when the consent was associated with an internet or a downloadable App account purposed for mobile use account purchases or IoT services.  Unless the subscriber did the responsible thing and updated their new number and re-affirmed expressed written consent, the mobile marketer would be unaware of the number re-assignment.  It was a TCPA landmine.  Mobile marketers would continue to reach out to the account telephone number on file by text and discovered that they just reached out to a new subscriber (who had no clue who they were) either by consent revocation or a demand letter or lawsuit alleging a violation of the TCPA.  Telemarketers faced the same scenario, particularly when the consenting party on their list used a prepaid cellular phone for being contacted.

The U.S. Court of Appeals for the District of Columbia Circuit recognized this catch-22 when it found that FCC’s treatment of calls to re-assigned numbers as prescribed by the Commission’s 2015 Omnibus TCPA Declaratory Ruling and Order was simply untenable in the Court’s rulings under ACA International et al v FCC.  The FCC became more practical about its approach in its re-approach to the issue in its December 13, 2018 released the Reassigned Numbers Database Order. See, Advanced Methods to Target and Eliminate Unlawful Robocalls, CG Docket No. 17-59, Second Report and Order, 33 FCC Rcd 12024 (2018).  The FCC Order sought to establish a database that would allow marketers to determine whether a telephone number has been permanently disconnected after a date certain, and thereby confirm that number no longer assigned to the party they want to reach.  This approach was similar to the FTC’s DNC list, except carriers would be required to share known information by reporting it for database purposes.

The permanent disconnection aspect was also unique.  This would indicate that the subscriber number in question did not port (transfer) to another telephone carrier under LNP rules, but instead, was cancelled by the subscriber outright thereby placing the telephone number into the pool of aging numbers to be re-assigned after a prescribed period.  It was a linkage of information that carriers historically had with telemarketers and mobile marketers who historically had not.  The database could then be subscribed to by marketers to reduce calling or texting to re-assigned numbers to ensure better compliance. Equally, those that failed to do so would more clearly were violating the TCPA.  Per the Court’s ruling in ACA International, the FCC would then have a tenable policy of compliance while still being fair to marketers. It would also have the tangible effect of dramatically reduce the number of unwanted solicitations by phone or text to consumers who had been given a re-assigned telephone number from the North American Numbering Plan pool.

On June 26, 2020, the FCC took a major step into making that national Reassigned Numbers Database a reality.  The Commission announced approved carrier compliance dates in creating the database under new rules published in the Federal Register. The process starts with the standardization of carrier record maintenance for telephone number re-assignments.  No longer will this be subject simply to the carrier’s internal policies.  Beginning July 27, 2020, voice service providers must maintain records of the most recent date each number was permanently disconnected and must age telephone numbers for at least 45 days after disconnection and before reassignment; Small business voice service providers have until January 27, 2021, to comply with this record maintenance rule.  See, 47 CFR §§ 52.15(f)(1)(ii) and (f)(8), 52.103(d), and 64.1200(l)(1) (effective July 27, 2020).

This means that by January 27, 2021 carriers shall be recording and aging telephone numbers in a uniform fashion, by federal regulation.  With this uniformity, telephone number integration into a national database of re-assigned numbers is but a short time away. The advantage of the national database will place telemarketers and mobile marketers in a fair position to avoid running afoul of the TCPA because of a stale consent due to a telephone number reassignment.  The database will also hedge the consumer use of month-to-month prepaid mobile phones for the receipt of mobile marketing.  The use of these types of mobile phones stands to increase as the economic impact of COVID-19 shutdown unemployment settles into hard numbers and those effected begin to scale-down their monthly expenses to whether their financial circumstances.

While process toward the national database is positive, it is not here yet.  Marketers and mobile marketers are wise to keep to existing compliance measures to ensure expressed written consent for a telephone number is still good.  Account verification through email, text messages and inbound customer service protocols should be maintained until the database is fully in place.  In-App Push messages to verify contact and consent confirmations should be employed by Mobile Apps and their providers.  Granted one year from now TCPA compliance may be one aspect simpler, marketers must keep vigilant until then.  There will likely be a push of re-assigned number TCPA cases from plaintiffs in the next coming year as the likelihood of future catch-22 TCPA scenarios stands to be greatly reduced.