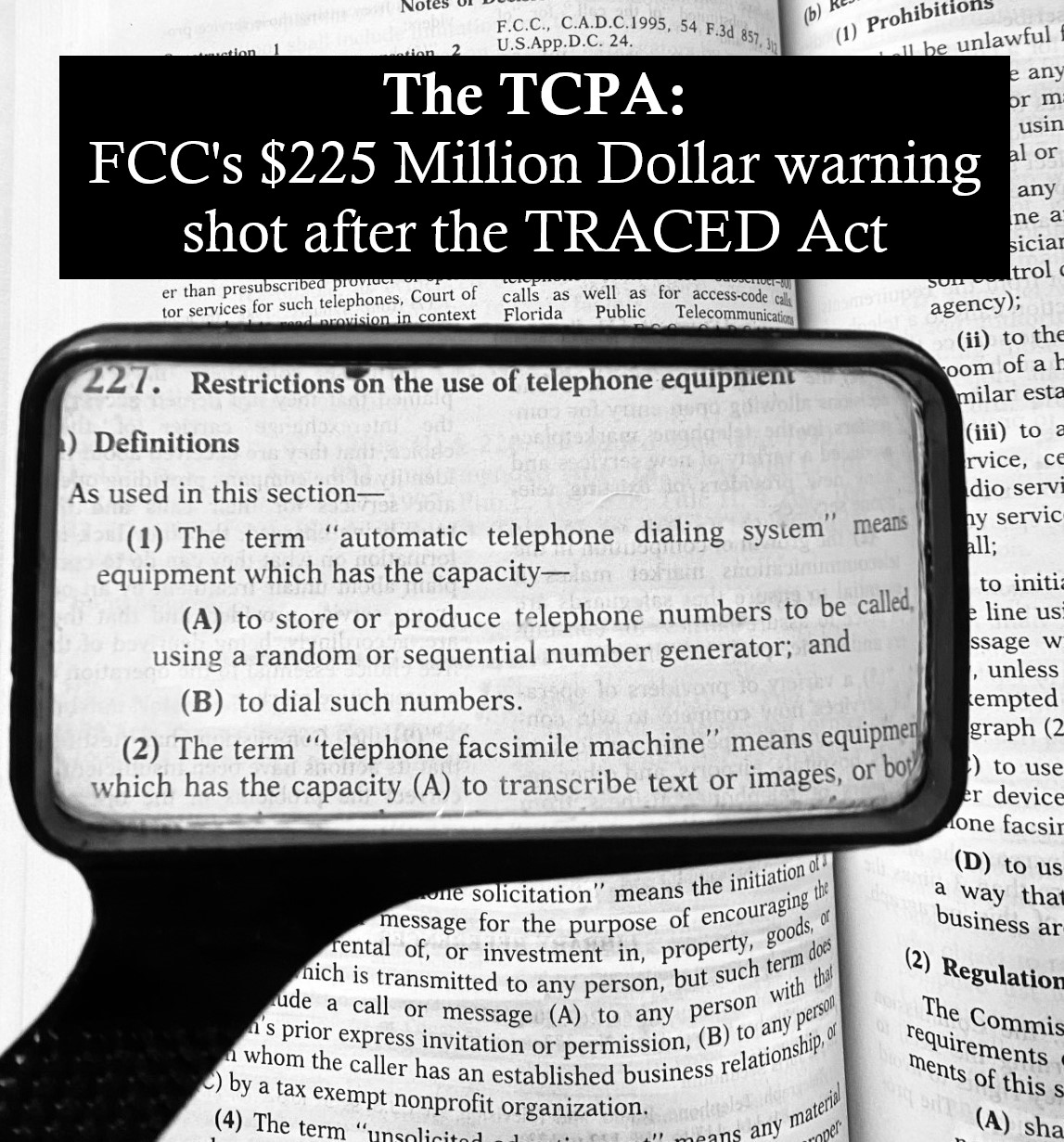 As previously discussed in Maldonado Law Group’s blog (A Post COVID-19 Snapshot of TCPA litigation for Florida), the FCC appears to be turning its attention to being the leader in enforcement of TCPA robo-call and robo-text violations nationwide.  The FCC was granted greater investigative enforcement powers under the TRACED Act this past December 2019.  The TRACED Act revised substantive portions of the TCPA’s Section 227 that had long handcuffed the FCC from taking a greater role in enforcement of widespread and repeated TCPA violations.  It also coupled with expanded powers under the Federal Communications Act (FCA) prohibiting call Spoofing, the masking or misrepresentation of indentifing caller information under the Federal Truth in Caller ID Act of 2009.

Prior to the TRACED Act, enforcement of widespread and repeated robo-call and robo text violations had largely been left to private citizen claims under the TCPA either individually or under punitive class action relief.  The FCC’s role was more limited to interpretation and policy-making rules as to practical aspects of changing consumer needs and telemarketing technologies.  Enforcement by the FCC was relegated to its licensees or those in the more defined (but now legacy) arena of junk-faxes.  Even then, traditional enforcement procedure enacted under the original FCA of 1934, and left in-place under the amended 1996 FCA, muted the FCC’s enforcement power. The FCC had long bemoaned that the FCA had ill-equipped it to take the leading role the TCPA had contemplated, but revisions from Congress were slow and political priorities elsewhere.  The FCC lobbied for these changes but it was far from one pushed by consumer demand or a Commission priority.  The time had not arrived.

Under Chairman Ajit Pai, this changed in a short-game, long-game approach.  The FCC ramped up its enforcement of Federal Truth in Caller ID Act and made on-going rule amendments to section 227(e) of the TCPA to better enable enforcement of Spoofing violations within the field of telemarketing.  Under this approach, the FCC mandated that carriers and providers in the industry true up their operational practices to ensure compliance.  This meant they were approaching the robo-call and text enforcement from within the transport industry, those providers carrying the violating calls.  This was the early roots of the Taceback Group.  This Group is an industry association that shares information among carriers and providers to help the FCC “traceback” the origin of the traffic of illegal calls as a provider, and its offending customer.  The FCC also had the power to enlist the cooperation of its licensed carriers and providers, and used it, even if they were not necessarily participating in the organized voluntary effort.  The FCC then began to enforce anti-Spoofing cases againsft telemarketers and private persons alike. Under its investigations, the FCC had access to record the entire chain of any potential Spoofing (and TCPA) violations direct from the communication transit pipeline. Traffic patterns and volumes could indicate whether an ATDS was in use and who exactly was called using it.

The FCC’s priority was the eventual enforcement of widespread and repeated illegal robocalls and texts in violation of the TCPA. It’s goal was get it right and not to sweep into that effort all marketers simply because of technical glitches or unknowingly calling a re-assigned telephone number for which they held previous expressed consent.  Re-assigned numbers had been traditionally troublesome for marketers under TCPA class action litigation. Most marketers lacked the information to avoid calling or texting a telephone number that had been re-assigned.  They dialed the ones for whom they obtained the consent. This was not the same for telecom carriers. Carriers possessed re-assignment information under LNP number protocols, however CPNI requirements prevented disclosure except under a lawful legal request – like under civil lawsuit subpoena under a active TCPA class action litigation.

To be fair to those marketers, and get to the real TCPA offenders, the FCC began an effort to establish a create and maintain a national reassigned numbers database, similar to the FTC DNC registry. This database could be subscribed to by marketers to avoid calling or texting a re-assigned number.  It would also curtail unnecessary litigation over simple errors created when a phone subscriber failed to inform marketers that they had changed carriers or telephone numbers associated with their consent. The effort culminated in the FCC adoption of new rules to create the database among all carriers and providers.  The apparent goal is to vet out occasional or limited errors by marketers from unnecessary large-scale enforcement (as originally contemplated by Congress under the TCPA) from those who were actually widespread and repeated offenders.  This would allow more proper enforcement of the TCPA by the FCC after long standing enforcement barriers where removed under the Act. Those barriers came down with the passage of the TRACED Act in December 2019.

The TRACED Act increased the FCC’s power to investigate and enforce the TCPA generally, but with certain first round objectives.  One of these objectives was the practice of one-ring consumer scams.  These were largely employed by foreign operators and marketers but had become pervasive to American consumers. Beyond that objective, the FCC was not limited in any way to take the lead in TCPA enforcement.  The TRACED Act also empowered the FCC, within its investigations, to ascertain if the violations were civil or criminal in nature and enable it to refer any criminal matter to the Dept. of Justice or any other agency of applicable authority (FTC).  And. it extended its SOL to four(4) years for violations and raised the limit of fines that could be levied against willful and intentional violations. The FCC enacted Rule adjustments to match these TRACED Act expansions during the 2020 quarantine shutdowns.  Then, it was a matter of time for the FCC to flex its muscle or at least “telegraph” where it may move next under the TRACED Act and the TCPA.

That day was June 10, 2020 with the FCC targeting a $225 Million Fine for 1 Billion Spoofed Robocalls between 2018 and 2019.  The FCC released In the matter of John C. Spiller; Jakob A. Mears; Rising Eagle Capital Group LLC; JSquared Telecom LLC et. al., FCC 20-74.  It is a Notice of Apparent Liability for Forfeiture against health insurance robo-call telemarketers and offers some interesting insight into the FCC’s next moves on TCPA enforcement.  Why?  Because the FCC “telegraphed” it right into the published NAL. Of particular interest are statements the FCC makes under paragraph 4 and footnote 10 of the NAL:

[Note 10.…We are not pursuing TCPA violations in this enforcement action as the identified violations occurred prior to adoption of the TRACED Act.]

The FCC worded this Section and footnote with great care.  The words “in this enforcement action” limits its enforcement of this particular matter to the Federal Truth in Caller ID Act because the violating conduct occurred prior to the passage of the TRACED Act. However the FCC equally acknowledges that the same power it exercised under the NAL can be applied to TCPA violations after the TRACED Act.   It is the first warning-shot of the things to come with FCC and enforcement of the TCPA.  As discussed in Maldonado Law Group’s blog (A Post COVID-19 Snapshot of TCPA litigation for Florida), this stands to impact private class action claims against telemarketers.

Another very interesting point telegraphed by the FCC in this NAL is what it considers evidence of intentional violation of Section 227 of the TCPA.  The FCC states in the NAL: The Commission has found that spoofing, when employed to further an unlawful robocalling campaign, can indicate an intent to cause harm. And then, the Enforcement Bureau cites footnote 11 – a collective of its the leading cases for determining exactly when willfully and intentional repeated violations have occurred, that includes:

Each of these FCC NALs delved into the actual sales proposition or purpose of the alleged violating marketing campaign.  From the standpoint of legal authority for TCPA trial work, the FCC is not merely interpreting the TCPA as a matter of policy, it is establishing enforcement authority of the TCPA from its agency enforcement perspective based upon applicable laws, rules and their own interpretations.  This perspective looks carefully to the nature and substance of the robo-calling campaigns to determine willful and repeated intent to violate the Act. The mere repeated occurrence of calls does not give rise to this type of intent.  It may seem subtle in this first NAL but it stands to shape forward going allegations and proof of “willful and repeated” TCPA violations in civil actions concerning the TCPA.  The FCC has primed the issue.

Finally, Section 7 of the NAL demonstrated that the FCC knows it now wields more investigative power within the four year TCPA statute of limitations, and it’s better business records that obtainable in any discovery recourse available under civil litigation.  In September 2018, the Traceback Group informed the Enforcement Bureau (Bureau) that it had traceback information for millions of robocalls containing prerecorded messages about health insurance.  It then cites footnote 14: … Traceback is the process of tracing suspected illegal robocalls through multiple voice service provider networks until the originating voice provider or the calling party is identified. USTelecom Industry Traceback Group, 2019 Progress Report at 3 (2019).  The Enforcement Bureau then uses that information to tabulate a more accurate number of offending calls actually made.  The Traceback Group determined that approximately 23.6 million health insurance robocalls were crossing the networks of the four largest wireless carriers each day [Citing Note 15, USTelecom Subpoena Response (Oct. 4, 2018) (on file in EB-TCD-18-00027781)].

The take away is that discovery in civil litigation is beginning to look paltry compared to the FCC’s new ability to find, track and address TCPA violations under the TRACE Act.  Records and evidence are easily available to the FCC directly from the pipeline that the communications flow to the consumers.  Carriers and providers are now inevitably part of that FCC investigation process.  Allegations of violations by the FCC are more solidly founded in actual evidence of repeated and widespread conduct, as opposed to mere information and belief shoehorned into a fuzzy allegation.  And most importantly, the FCC’s fines can take priority over any civil action that may be pending against an offender.

Looking forward, carriers and providers should be cognizant of the TRACED Act and its TCPA implications for the call center and marketing traffic they carry and provide.  They may be called to trace back such traffic within the transit chain of traffic.  Contract clauses with written TRACED Act references and TCPA policies may need to be implemented or reviewed when telemarketing traffic is supported.  Telemarketers and Mobile Marketers are also wise to implement or review written TCPA and seek legal counsel for existing expressed written consent opt-ins (through website, mobile application or direct signature), ad content clearance and script clearance to ensure compliance.  Moreover for those of us soldiering TCPA civil litigation, prepare to move over and pivot in the near future.  There is a new player on the field.  It’s the Comm’ish. The next NAL from the FCC stands to be directed to address widespread and repeated TCPA violators, and when that happens the TCPA world stands to change.  Exactly how is yet to be seen.  But one thing is certain. It will not be a subtle warning shot that is “telegraphed” within the footnotes of a NAL for a Spoofing violation.