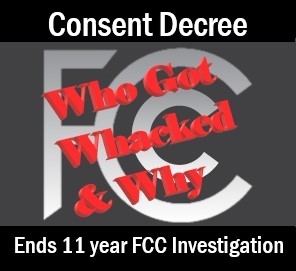 In RE: In the matter of magicJack VocalTec Ltd., magicJack, LP, and YMax Communications Corp.

Enforcement Issues and fine: FCC terminates an investigation that began in 2009 in exchange for a $5,000,000 USD fine imposed against Magicjack et al and regular reported compliance plan to ensure compliance under a negotiated consent decree for alleged violations of the federal regulatory reporting (FCC 499) and contribution rules.

What’s at Issue & Why:   To really understand this consent decree, we need take a way-back machine trip nearly 11 years ago to the year 2009. (My personal kudos to Magicjack and its legal team on that long high punt. It’s an impressive enforcement action defensive move.)  At that time, the marketplace was different. Two overarching issues were confronting the telecom industry and the FCC with regard to USF and FCC Form 499 reporting.

The First was the maturation of VoIP as THE next-generation technology to replace legacy TDM and POTS service among providers and their consumers.    It had been only 14 years since the original patent for Voice over IP had been applied for with the USPTO in 1995.  It was a mere eight since that patent was granted in 2001.  Consumers had embraced startups like Vonage as an alternative to POTS in their homes and offices and began to migrate to what we call I-VoIP today.  It was only two years since the U.S. Court of Appeals for the Eighth Circuit affirmed the FCC’s preemption over state regulation of Vonage’s DigitalVoice VoIP Service and VoIP services in 2007.  Florida startup YMax Communications, a competitive local exchange company (CLEC), had for 2 years offered interconnected VoIP to consumers via a USB device, loaded with software and a subscriber line interface circuit, to piggyback phone service over the consumer’s ISP internet broadband data connection. For consumers, the service proposition of Magicjack was simple.  Plug the USB into a computer connect the traditional handset and you had local and national calling for the low cost of the peripheries and service.  For YMax, as a CLEC, there was inter-carrier business, the sale of Magicjack USBs, and the consumer VoIP service.  It was a novel innovation between old and new phone services in a burgeoning competitive marketplace at the time.

The second issue was enforcement of regulatory fees over Interconnected VoIP along with telecommunication services. The FCC in its Vonage Order had split the proverbial Title I and Title II “baby” and defined VoIP as a hybrid telecommunications service with a “light touch” of regulation.  That light touch did not include the reporting on the FCC Form 499-A or contribution of regulatory fees. Those were governed by Sections 159, 225(d)(3), and 251(e) of the Federal Communications Act (FCA), and Sections 1.1154, 1.1157, 52.17, 52.32, 54.706(a)-(b), 54.711, 64.604(c)(5)(iii)(B), 64.605, 64.1195 of the FCC’s rules.  Under the non-for profit National Exchange Carrier Association (NECA), and its subsidiary USAC, the reporting and collection of USF had become more rigorous with communications providers. USAC is particularly delegated by the FCC for the collection and distribution of the USF on behalf of the FCC.  Where and when reporting was conflicting or under reported, USAC Audits were then initiated and USAC could refer matters to the FCC’s Enforcement Bureau (EB).  Where and when USAC had no reporting, USAC could also refer the matter to the FCC.

Apparently, Magicjack hit the FCC’s regulatory USF reporting and contribution tripwire sometime in 2009 or 2008. This resulted in the opening of an investigation under EB-09-IH-0755 in 2009. That case tolled under consent decree negotiations and 6 years later was assigned a new one, EB-IHD-14-00014887. This Consent Decree relates back to both cases.

Now unlike Consent Decrees used to resolve a published NAL, Investigative Consent Decrees are used to close open investigations privately and not detail any particular fact of the underlying alleged violation.  These types of Decrees settle a violation allegation before any formal allegations are made by the Enforcement Bureau through a NAL. It’s a preemptive step. Only generalized allegations are referred to under negotiated terms of the approved Decree.  This leaves those of us in the general public with less room to understand the “Why” of the matter so we can learn how to avoid such circumstances.  However the base violations all relate to interstate revenue reporting under the FCC Form 499.  This is not a new topic to FCC Enforcement Actions.  There have been many NALs and cases enforced by the FCC or later in the U.S. federal district courts regarding these types of violations. The more interesting aspect of this matter revolves around the Consent Decree itself.

First, it involves the settlement on an ongoing investigation, not a NAL or an order implementing a fine.  That’s important. This means that the legal team requested Consent Decree negotiations with the FCC early in the process – likely when the Letters of Inquiry (FCC Admin Subpoena) was served and during in response period.   This is a strategy that Maldonado Law Group has used multiple times in the past with our clients in FCC investigations where evidence of the violation is not favorable and it looks like an eventual NAL scenario.  The process is not automatic. The investigated company or person has to request it in writing. Once requested, the FCC can’t say no to it. It can only drop out of negotiations if there is an impasse. The FCC then continues its investigation but any enhancement of any fine or penalty applicable is usually mitigated under any final Consent Decree because of submission to the negotiation process.   A dialogue also begins between the Enforcement Bureau and regulatory defense counsel.  If the dialogue fails, the investigation or NAL can proceed on its regular administrative course without an agreed settlement – NAL issued.  If it continues on, the investigated company (or person) typically enters into a tolling agreement with the FCC on the violation that is later embodied in the final Consent Decree.  It’s sometimes a win-win for both sides as the FCC does not lose its SOL on the violation and the client gains more time to resolve a difficult violation. It just depends. However the longer consent decree dialogue continues on, the more defensive arguments or facts regarding the specific FCC Rule or application of the FCA can be brought forward and be used by regulatory counsel to refine the outcome.

The real exceptional takeaway in this instance is the length of time the Magicjack Consent Decree negotiations took – about 11 years.  Think of it. That’s the span of 2 different presidential administrations appointing 2 different FCC Commission heads and the majority of Commissioners.  This is rare.  Now other factors could have contributed to the FCC working with that long-punt scenario, for example: perhaps the law was fuzzy at the time of the alleged violation; perhaps the death of one of Magicjack’s founders around that time impacted the ability of the company to proceed or agree to a Consent Decree until a later time; or perhaps enforcement priorities changed but there was still a legacy violation here that needed to be addressed.  These are the unknowns that will remain unknown by virtue of a Consent Decree.  Those aspects are confidential under the settlement. The value of seeking Consent Decree Negotiations early with the Commission and while still in the investigation process is exemplified well by the Magicjack Consent Decree.  Few knew of the potential violation until it was already resolved.

This is sometimes a defensive option overlooked when responding to FCC investigations. However it’s the perfect time to do so. Granted, it may not always lead to more advantageous results (like the FCC dropping the matter with no fine). It can lead to more definitive or controllable final results so the company can absorb any penalty/fine after correcting any practices that lead to the investigation.  Those who receive an LOI from the FCC Enforcement Bureau concerning a USF contribution or FCC Form 499 reporting violation are wise to keep this carefully in mind when assessing next moves with regulatory counsel.