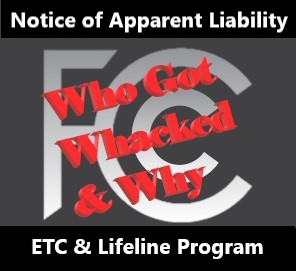 FCC ALERT: FCC Eligible Telecommunications Carriers (ETC) under 47 U.S.C § 214(e) who use independent sales agents or Independent Sales Offices (ISOs) for registration and sign-up of low-income Lifeline subscribers, or, have had issues with claims submitted to USAC and NLAD anomalies are advised to review the following:

In RE:  In the Matter of TracFone Wireless, Inc.

What’s at Issue & Why:   Licensed Common Carriers may become designated as Eligible Telecommunications Carriers (ETCs) to receive federal universal service support subsidies (USF) for providing Lifeline service to eligible low-income subscribers under 47 U.S.C § 214(e).  This requires a grant of such qualification by a state utility commission or the FCC if the ETC is not subject to the state commission’s jurisdiction.  Once designated, an ETC may receive federal Lifeline support in an amount of up to $9.25 per month, per eligible subscribe.  ETCs are required to pass these subsidies paid as discounts to eligible low-income consumers.   Any subscriber who is not already receiving Lifeline support, has a household income of the subscriber is less than 135% of the Federal Poverty Guidelines, or is already qualified under federal assistance programs including Medicaid, Supplemental Nutrition Assistance Program, Supplemental Security Income, Federal Public Housing Assistance, or Veterans and Survivors Pension Benefits, is considered low-income or otherwise eligible.   FCC rules prohibit a consumer, or multiple consumers, from receiving duplicate life line support if they live together as the same economic unit in the same household or at the same address.  FCC and state rules place the responsibility for accurate and correct certification of eligible life line recipients before seeking any Life Line subsidies.  Payments of Lifeline subsidies are managed by the Universal Service Administration Corporation (USAC), a non-for-profit delegated agent of the FCC.  USAC administers qualified payments through the National Lifeline Accountability Database (NLAD) that receives and processes subscriber data and prevent ETCs from enrolling new subscribers without first confirming that the subscriber’s household does not already receive Lifeline service.  TracFone provides wireless Lifeline service under the SafeLink Wireless brand and offers Lifeline Support in 41 states.

As a practical matter, ETCs often use contracted sales agents or Independent Sales Offices (ISO) to outreach in the field with prospective Lifeline subscribers.  Sales agents and ISOs earn their compensation based on Commission or volume sales goals for eligible subscribers signed into the ETCs Lifeline services.  Depending upon the ETC, field information of qualified Lifeline Subscribers is obtained by completed printed forms or electronically through electronic devices like tablets that upload information to be cross-checked with NLAD on a real-time or daily basis.

This NAL involves the submission of fictitious accounts created by manipulating the eligibility information of existing TracFone subscribers.  This manipulation and fabrication appears to have occurred at the ISO and sales agent level, likely to increase the commissions earned from TracFone.   The FCC alleges that TracFone’s sales agents apparently used household dependents’ identifying information to enroll multiple members of the same household as distinct and generate additional sales sales for commission purposes. The FCC alleges both TracFone and its sales agents benefited from this conduct.  The agents earned money by fabricating the new enrollments and TracFone benefited by receiving Lifeline support subsidies by submitting claims for the fabricated enrollments.

The investigation supporting this NAL originated from a referral by USAC based on NLAD.  In May 2018, USAC identified a group of claims made by TracFone that were potentially fraudulent or erroneous duplicates of existing Florida subscribers. In August 2018, similar issues were reported by the Public Utility Commission of Texas. By September of 2018, the FCC’s Enforcement Bureau had sent an administrative subpoena, or Letter of Inquiry (LOI), to TracFone regarding the suspect claims.  Before responding in writing to the LOI, TracFone submitted to USAC an amended reimbursement claims and returned $101,143 in Lifeline disbursements for the ineligible Florida subscribers detected by USAC.  In the interim, USAC determined that TracFone appeared to have over-claimed $229,483 in federal Lifeline support for Texas subscribers in 2018.  TracFone returned another $1,171,611 to USAC on amended reimbursement claims for Texas customers during 2018 but prior to its LOI response.  TracFone later admitted in LOI Responses that its sales agents fabricated enrollment data resulting in TracFone apparently receiving Lifeline support for these fictitious or duplicate subscribers contrary to the Communication Act and FCC Rules.  The FCC supported the fine of $6,013,000 by applying a “forfeiture methodology in Lifeline cases designed to address and deter waste, fraud, and abuse by careless or manipulative ETCs seeking federal funds to which they are not entitled.”  It was also based on TracFone’s LOI admission, which carries a federal perjury certification.  The base forfeiture began at $5,738,000. An upward adjustment of $275,000 was made by the FCC to that base forfeiture for TracFone’s Florida conduct.

Takeaways: In recent years, Lifeline waste and misuse has been a top priority of the FCC and its Commissioners.  This is for two reasons. One is that these subsidy funds originate in USF contributions remitted by contributing carries from end-user regulatory fees – a regulatory fee collection that is heavily enforced with the carriers. Second is that waste and misuse plagued the Lifeline Fund for many years.  To combat waste and misuse, the FCC initiated the NLAD system and reinforced its efforts by USAC to detect fraudulent claims with all federally subsidized communication services mandated for the public benefit.   Maldonado Law has seen this first hand.  We have represented numerous clients, both ETC and ISO, in multiple investigations and enforcement actions involving erroneous or suspect Lifeline, Rural Healthcare, Schools and Libraries, and TRS subsidy claims.  This has not included only the Enforcement Bureau but also the FCC’s Office of Inspector General for potential referral to the DOJ under the Federal False Claims Act. Indeed, the FCC is taking these ETC cases quite serious these days.

For FCC practitioners, the TracFone NAL should have been the stuff of a Request for Consent Decree Negotiations while in the investigation phase and prior to LOI Response.  Such a Request stood to have an impact on the base fine and upward adjustment issued by the FCC.  The issue really boils down to a lack on effective monitoring of sales agents by the ETC, not a concerted plan to submit false claims. Many ETCs are plagued with this problem by the very nature of the sales channel.  In-person or one-on-one contact must be established by the sales agent to qualify sign the subscriber up.  If the sales person is independent and incentive purely by commissions, and additionally is not under heavy compliance scrutiny by the ETC (through electronic cross checks or otherwise), then the recipe is ripe for NALs of this nature.

Prevention is the best medicine.  If anything can be taken away from the NAL woes of TracFone here, it is that unless an ETC’s sales agents are employees then a constant compliance eye must be kept on them.  It is a far better scenario for the ETC to discover the potential fraud by sales agents first, inform USAC that amended Lifeline reimbursement claims will be forthcoming because of the discovery, and return erroneous claims as they are verified, then to be blindsided by groups of anomalies on NLAD referred to the Enforcement Bureau for enforcement.  Remember, ETCs are responsible for this compliance solely.  USAC has no obligation to give a “heads-up” on anything submitted to NLAD.