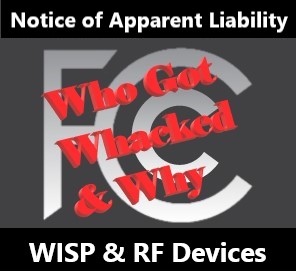 In RE: In the Matter of Buzzer Net LLC San Juan, Puerto Rico

Enforcement Issues and fine: FCC proposes a $25,000 fine against Buzzer Net LLC for apparent violations of section 301 of the Communications Act and the Commission’s U-NII rules

What’s at Issue & Why: In 2003, the FCC allocated spectrum for unlicensed use by U-NII devices in the 5 GHz band as a means of promoting competitive wireless broadband services. See, 18 FCC Rcd 24484 (2003). Many wireless Internet service providers (or WISP) rely on U-NII devices to provide point-to-point broadband connections within their networks.  WISP service is increasingly popular for consumers in places like Puerto Rico and Florida because of hurricanes and sporadic density of tall buildings and their distances from one another due to the sprawl of lower standing structures.  These devices are easier to deploy and move if needed, and, in the event of hurricanes can be run off of personal generators at the location. Now before addressing the substance of the NAL there was one interesting aspect that catches the eye of the FCC practitioner.  The FCC recognized Buzzer Net as a “Small Business Concern” as defined in the Small Business Act (Pub. L. 85-536, as amended) and further stated it may avail itself of rights in that Act, and as set forth in 15 U.S.C. § 657.  This may not seem like much, but for small-sized operators it is.  Years back, small sized operators had to wait until the FCC issued a NAL to plead their case as a Small Business Concern.  This usually resulted in a scenario where a small-time operator could face a big-time FCC fine because the Enforcement Bureau looked only to the technical offense and not the surrounding circumstances and the company’s economic wherewithal to pay a large fine.  Here, the FCC took this into account from the beginning and it was refreshing see from an FCC practitioner’s perspective.  However in considering this, the FCC did send a clear message to WISPs that are Small Business Concerns – three strikes you’re out when it comes to RF interference!

Buzzer Net was not NAL’d without a few prior FCC field warnings.  These warning dated back to October 3, 2017 when an FCC field agent emailed Buzzer Net and cautioned not to operate a U-NII device that causes interference to the nearby FAA airport terminal Doppler weather radar system for San Juan, Puerto Rico. Later, on June 28, 2018, the Bureau issued them a written warning advising Buzzer Net that operating an unlicensed radio transmitter violated section 301 of the Act (a Notice of Unlicensed Operation or NUO), and that, operating U-NII devices outside the parameters of its equipment certification violated part 15 of the Commission’s rules.  So, two prior warnings (one by email, one by written NUO) were given Buzzer Net based on the deployment of U-NII devices near the radar station and over the equipment certification parameters were against the Rules.   The warnings likely sat in the Field Office as potential violations not yet affecting the radar station, but then came May 30, 2019.  The FAA reported to the FCC that its Doppler weather radar station serving the San Juan International Airport received interference from a source to the East-Southeast of the radar station. Not surprisingly, the Enforcement Bureau sent field agents out to check on June 3 and 4, 2019.  They discovered the Transmitter Site as being a nearby condominium penthouse. When they inquired within they were informed by the tenant that they were a subscriber of Buzzer Net.

The field agents then contacted Buzzer Net.  They then met with a Buzzer Net representative on-site of the interference.  Turns out that the configuration of Buzzer Net’s U-NII equipment had been installed with an Access Point set to default to a country code of “Argentina,” thereby operating under a country code not of the U.S. and beyond parameters under the FCC’s Rules.  Other devices were also reviewed on site.  These Devices had no option to select the United States or Puerto Rico as the country code in their operation.  Needless to say the interference was remedied then and there by Buzzer Net deleting “Argentina” from the country code of the Access Point configuration and turning off the other Devices that could not meet the code.

Since the field agents discovered two offending devices on June 4, 2019, the FCC found two apparent violations of Section 301 of the Act and sections 15.1(b) and 15.407(h)(2) of the FCC’s Rules for  an aggregate base forfeiture of $20,000.  Because offenses were egregious (resulting in a complaint by the FAA about interference to the Doppler radar at the nearby airport) an upward adjustment of $5,000 was applied.  The FCC also wanted to be certain about compliance. It required a Buzzer Net corporate officer to submit a statement signed under penalty of perjury within thirty days of the NAL that each U-NII device that it operates is operating in compliance with FCC Rules and the equipment’s applicable authorization under the Rules.

Takeaways: The issues of this NAL  boils down to two things: 1.) if you use equipment not from the U.S. check its parameters to see that it complies in operation with FCC Rules (this means more than just seeing an FCC Part 15 label on it); and 2.) if the FCC field office warns you twice in writing about perceived radio interference, go check it out and the equipment and the configurations. This is particularly true if you’re deploying point-to-point it near an airport, hospital, fire department or police station.  The cost of two Rule compliant U-NII devices and configuration is far, far less than a base $20,000 NAL or even the $5000 upward adjustment.

Now Buzzer Net was by no means the only one causing interference to the airport terminal Doppler weather radar system in San Juan, Puerto Rico at the time.  On May 7, 2020, DWireless & More Inc. was slapped a NAL (DA/FCC No.: DA-20-492; EB File No.: EB-FIELDSCR-20-00030473) for a $25,000 fine under a very similar factual scenario as to U-NII device configuration. There are important takeaways from all of this for WISP providers in hurricane zones.  All the events that occurred with Buzzer Net and Dwireless happened post Hurricane Maria impact on Puerto Rico.  Those of us who live and work in these zones know that the days, weeks and often months after the impact is like living in the Stone Age with limited modern infrastructure and scarcity of equipment and goods.  It’s a crazy time.  However it’s important at that time for WISPs and other wireless broadband providers to check their replacement equipment.  Granted, you may have to turn to foreign suppliers or use brands you have not used before because of scarcity but that does not mean that RF Rules don’t apply afterward.  As hurricane season is just upon us here in Florida and elsewhere, now is the time to make sure technical rule compliance for replacement equipment and devices is in order.